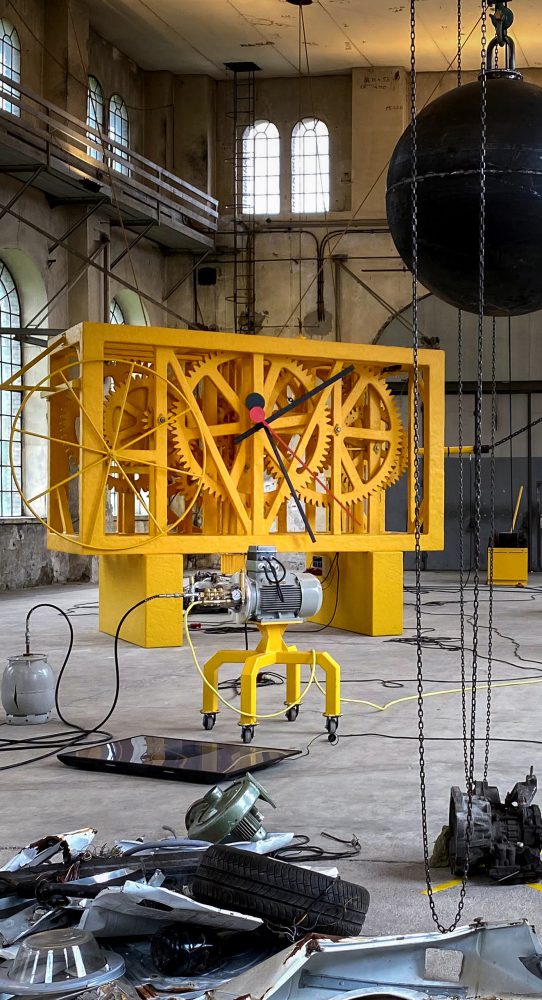 'The Clock Which Will Solve Every Problem in the World', Kunstraum Dornbirn (AT)

We are all going to die. The end is near. Second by second The Pendulum reminds us of our mortality. The giant time piece is like a hibernating bear: beautiful and perhaps even endearing, but deadly nonetheless. Its sound is more a hypnotic pulse than a nervous ticking; every 15 minutes a hammer striking a gas cylinder sounds an industrial death knell.

The Pendulum consists of an elaborate system of cogs which is powered by two suspended pallets carrying cement bags that weigh some 1,000 kilos. The counterweights are attached to the roof of the exhibition space, making it part of the work and physically encapsulating visitors in time, the building becomes a part of the clock.

Sneak preview: press here for a video of Pendulum (2019) 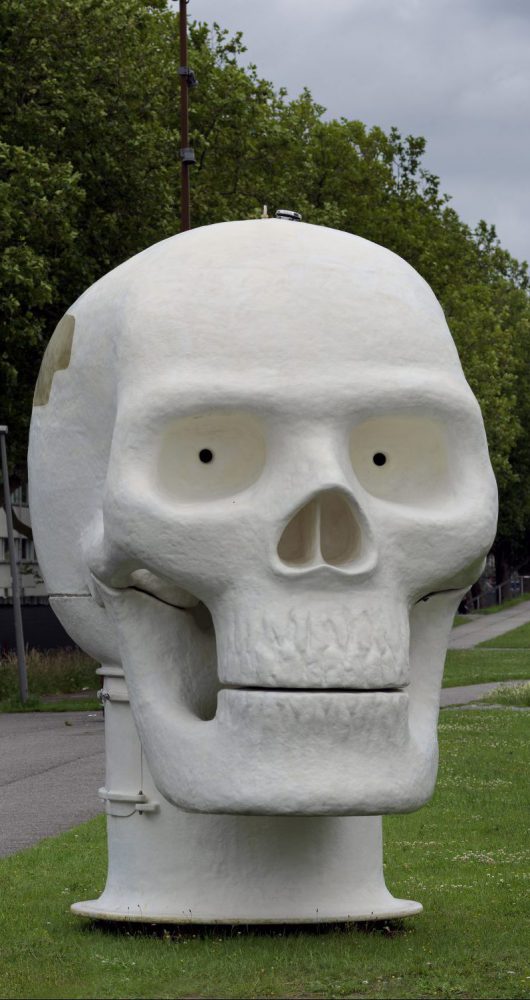 ‘Let’s Get Physical’ is a dynamic exploration of the burgeoning industrial Merwe-Vierhaven area in the west of Rotterdam, highlighted through a selection of 30+ Atelier Van Lieshout sculptures at 13 locations. Get your free road map at AVL Mundo Sculpture Park which serves as the sculpture route’s home base. Other participating locations are: Weelde, Keilecafé, Keilepand, Keilewerf, Stichting Dakpark, The Lee Towers, CrossFit Nultien and several publicly accessible venues.

Link to press kit with additional texts and images

From the 2nd of December, the foyer of the Gemeentemuseum Den Haag features the new artwork Henry, de Statistocraat by Atelier Van Lieshout. The eight-metre-high sculpture is designed to serve as a visitor information desk and is a humorous nod to the ‘rivalry’ between H.P. Berlage, architect of the Gemeentemuseum, and his Belgian contemporary and confrere Henry Van de Velde.

The commission was prompted by the Gemeentemuseum’s desire for a visitor information desk worthy of a great public art gallery. It had to be different from the usual nondescript counters found in railway stations, airports, municipal offices, cinemas and shops. Museum director Benno Tempel: “In many museums, the entrance hall is essentially no different from the equivalent in any railway station or airport. That’s why we’ve brought in the enfant terrible of the Dutch art world to design something completely out of the ordinary. The result is a distinctive information desk that will leave visitors in no possible doubt that this is a space for the arts.”

Van Lieshout’s creation, Henry, the Statistocrat, makes playful reference to the work of Belgian artist, designer and architect Henry van de Velde – a founder of art nouveau, trailblazer for the later Bauhaus, and famous in the Netherlands primarily as the architect of the Kröller-Müller Museum.
In terms of artistic ideas, Berlage and Van de Velde had much in common: both sought to eliminate the distinction between art and design and to approach architecture as a Gesamtkunstwerk. At the same time, they were rivals who competed for major contracts – especially for museum buildings. Berlage also produced a design for the Kröller-Müller Museum (which was rejected), and with Henry, the Statistocrat Van de Velde has now placed his stamp on the Gemeentemuseum.

Der Hausfreund is your most ambiguous friend. Like the postman, he comes around all too often, especially when you yourself are not around. A friend of different faces and functions – just like the multifaceted artworks of Dutch sculptor Joep van Lieshout. The eponymous exhibition at Galerie Krinzinger shows a selection of his recent artworks, which ask questions about destruction and renewal, coincidence and concept, minimalism and functionality.

‘The Good, the Bad and the Ugly’, Ruhrtriennale 2016, Bochum (DE)
Exhibition
“Can we still separate man and machine?”
At the 2016 edition of the Ruhrtriennale, Atelier Van Lieshout will be presenting the installation The Good, the Bad and the Ugly. The installation at Bochums’ Jahrhunderthalle will include last years’ public favorites like Domestikator and the Refektorium, in addition to a selection of new and site specific works focussing on the theme “Man and Machine”.
12 August – 24 September 2016

As part of the Jheronimusch Bosch 500 manifestation, Atelier Van Lieshout will present the Gesamtkunstwerk SlaveCity (2005 – 2009), as well as recent works, as part of a large solo exhibition at Museum De Pont in Tilburg.

Parallel with the Biennale di Venezia, Zuecca Project Space will be showcasing a selection of architectural models from SlaveCity
www.zueccaprojectspace.com

A survey of artists’ site-specific projects on the water, including Atelier Van Lieshouts Women on Waves container.

From Friday 22 April, TENT shows the plans and dreams of artists and architects for a new Rotterdam in the extensive group exhibition Utopian Dreams. These acclaimed and imaginative projects inspire a wider debate on the future of Rotterdam. A city evolves through becoming more diverse, innovative, and ecological. Now that Rotterdam, with its distinctive skyline, is (almost) complete, the question arises: what is the artist’s current perspective on this city? What does the city now need?

Almine Rech Gallery is pleased to present the first solo exhibition by dutch artist Joep van Lieshout at the gallery. In this exhibition titled Primitive Modern, Joep van Lieshout presents the transition between two key projects: the new project Neo-futurism and recent works from the Gesamtkunstwerk New Tribal Labyrinth, which the artist has beenworking on for the last four years. Both projects depict the same paradoxical utopian desires, while bringing to the fore a clear shift through a future vision on the development of the world.

New Tribal Labyrinth is a series of sculptures that embrace the industrial revolution and depict the romantic longing to become one with both machine and matter. The series suggests the emergence of a new world order, inspired by old world orders. In this world, populated by fictional tribes, we see a return to agriculture and industry and the revaluation of ancient rituals. New Tribal Labyrinth is made up of agricultural, industrial and ritual objects, yet the exhibition mainly focuses on the world of rites and rituals. Sculptures that serve as objects of worship, victory columns and fertility figures refer to primitive sculptures. Venus figures and Madonnas, carved out of an intuitive and instinctive desire, stand on pedestals that refer to the modernism of the early 20th century.

Van Lieshout’s recent work Neo-futurism translates Futurism, the art movement of the early20th century, into 21st century contemporaneity in a disruptive manner. Technology, bigdata, acceleration, conflict, aggression, robotics and recycling are mixed with poetry and romanticism. Not only do they show a new direction in the oeuvre of Van Lieshout, but they also offer us a glimpse of a possible future under construction, based, on the one hand,on destruction and deconstruction. Yet on the other hand, the work depicts the optimism of (re) construction and new energy. A shining example is the endless column that gives new meaning to the remnants of primitivism.

The largest work in the exhibition is a tribal dwelling. This Essential Dwelling is like a rockcave carved out by man. Here, the inside space and functions are determined by the original desires and urges of the human being. An essential living unit whose interior is shaped by irrational wishes. Here again, a tribal object is mixed with the ideas of modernism. The sculpture is both contemporary and utopian, primitive and archaic.

The coming together of Neo-futurism and the New Tribal Labyrinth challenges the viewer to set in search of a new image of the future as a new mental point of reference. Past and future, modernism and primitivism, the rational and the irrational, utopia and dystopia, art, energy and science are brought together and investigated. In this way, Van Lieshout creates new systems and worldviews on the ruins of the past.

Atelier Van Lieshout, in collaboration with the Nationalgalerie, will be showing this public artwork on the Museuminsel for the next two years.

‘The Good, the Bad and the Ugly’, Ruhrtriennale, Bochum (DE)

‘The Good, the Bad and the Ugly’, Ruhrtriennale, Bochum (DE)
Exhibition

In the summer of 2015 a village will be created in front of the Jahrhunderthalle Bochum.  On a site where thousands of workers smelted, rolled, formed and hammered steel for 130 years, an unusual installation will be constructed: “The Good, the Bad and the Ugly”. Atelier Van Lieshout will create a lively and excitingly chaotic place for visitors, artists, festival makers, students and anyone who is curious.

“The Good, the Bad and the Ugly” is the biggest installation by Atelier Van Lieshout to date. At the center of the installation is the “Refectorium”, one of the venues of the Ruhrtriennale, where the Workshop talks will take place amongst others. The “Refectorium” is surrounded by new Atelier Van Lieshout works such as the “Domesticator” as well as by iconic works such as the “BarRectum”, the “Workshop for Weapons and Bombs”, the “Workshop for Medicine and Alcohol” and “The Heads, Claudia & Hermann”. Dacha-like buildings like the “Caretaker”, “Domesticator” and “Farmhouse” will complete this large-scale installation on the site of the Jahrhunderthalle Bochum

Atelier Van Lieshout is an interdisciplinary studio based in Rotterdam and working internationally. Its often provocative works operate on the boundaries of art, architecture and design. Recurring tropes and themes are self-determination and power, self-sufficiency and anarchy, politics and sex.

“The Good, the Bad and the Ugly” is an art village, a meeting point and the new heart of the Ruhrtriennale 2015.

The exhibition offers a contemporary outlook on creation in the broadest sense of the term. It also plays freely with the idea of a domestic installation that has more to do with the apartment of an amateur than the white cube that is the gallery.

From Thursday the 5th until Sunday the 8th of February, our workshop and exhibition space will be open to the public, daily between 1 pm and 9 pm
On display for the first time in the Netherlands will be the Blast Furnace, a more than 11 metre high steel installation that pays homage to our industrial past yet at the same time offers us a glimpse of production methods of the future.
Additionally, the AVL team will be casting, melting and forging in the smoldering ovens and rudimental machinery from the Happy Industry installation. Both the Blast Furnace and Happy Industry will be installed especially for Art Rotterdam.

Location: Keileweg 18, Rotterdam, the Netherlands
Entrance: free
How to reach us: Atelier Van Lieshout/AVL-Mundo is an official stop on the Art Rotterdam shuttle bus service
www.artrotterdam.com
This event is part of the Art Rotterdam Week.

On the 5th of May – Liberation Day – Atelier Van Lieshout will be doing a site specific intervention in the middle of Dam square, Amsterdam.

AVL has designed Het Orakel (The Oracle), a totem-like, two-and a half metre high head, which will be pronouncing SMS messages sent by the public. Everybody can have their opinion pronounced by Het Orakel.

Send an SMS to 2255, start your message with: Orakel , followed by the SMS, and Het Orakel will have the liberty to proclaim your text!