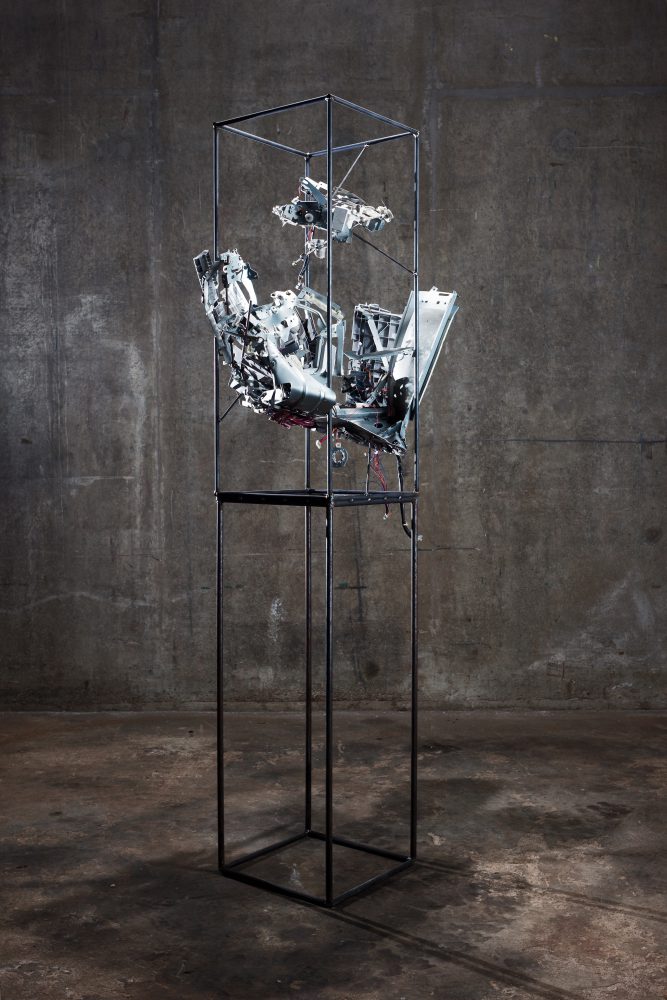 We live in a state of extremes. Extreme weather, as a result of climate change, is both scorching and inundating the planet with record temperatures, unprecedented wildfires and ever more frequent and severe droughts, storms and floods. Meanwhile, extreme ideologies and political positions are being amplified by the media’s news cycles and the echo chamber of the Internet, further polarizing societies already inflamed by extreme, and growing, inequality and resentments. Extremes breed more extremes, creating self-reinforcing cycles of pushback and backlash, and fueling spiraling feedback loops of increasing intensity.

More info via this link

Atelier Van Lieshout exhibits The Mechanical Turks (2015) at the Anren Biennale, China. The Biennial entitled, A Confrontation of Ideals is the second to take place in the historic city of Chengdu in Sichuan province, examining questions concerning humane, civilized community while sharing artists’ thoughts and efforts to deal with the complex realities of the world. The two automaton heads in The Mechanical Turks argue with one another in an accompanying audio work about whether to become Modernists or Primitivists.

A solo exhibition by Joep van Lieshout, Furnification features the results of the artist’s recent sculptural experiments that that form part of the series, CryptoFururism. By revisiting the Italian Futurists, the series explores resonances with emerging fascist tendencies today, revealing the interplay between utopia and destruction. In Furnification, van Lieshout not only pushes the limits of materials, but also questions civilization itself.

More information can be found on the gallery website

On August 27, 2017 the first edition of ART Break will take place. This festival will transform the beach of Hoek van Holland into a celebration of art and coast. With ART Break Hoek van Holland finally has its own festival. From an art installation, classical music to a live painting performance and a treasure hunt through the Atlantik Wall, ART Break is for everyone!

The initiators of the festival, the entrepreneurs of the Rechtestraat, want to show how special Hoek van Holland is and how much culture this beach town has to offer. ‘’Hoek van Holland has six museums and is a place where a lot of Rotterdam-based artist take their summer break, but a lot of people aren’t aware of this’’, says Freek Ruigrok of DeSurfschool.nl, one of the entrepreneurs.

The eye catcher of ART Break will be Atelier Van Lieshout’s Bikinibar laying on the beach! The Bikinibar was created in 2006 as a place where people can withdraw from the busy beach life or bad weather. But it is only now that she can finally lay on the destination where she was intended for: the white sands of Hoek van Holland.

The festival takes place on Sunday the 27th of August 2017 and starts at 10 in the morning until 6 in the evening. The programme offers a wide range of activities for visitors of all ages such as surfing lessons for children, a hip-hop workshop, but also various concerts and a live painting performance by Solko Schalm, the unofficial port painter of Rotterdam. The festival can be visited free of charge. Hope to see you there!

July 14 will see the opening of Façade 2017, where you can see Cage (2017) by Atelier Van Lieshout. Huis presents the audience with a deconstructed, distorted cage; a disfigured prison that symbolizes the human longing for freedom.

In addition, Atelier van Lieshout captured the deconstructive process of Huis in collaboration with filmmaker Sonia Herman Dolz. The straight-edged cage was pushed apart with the use of heavy, self-made machines – i.e. a large drop hammer and hydraulic press with pressure. This film will be on display at CBK Zeeland, Middelburg.

For more information about the locations and other artworks on display please see the CBK Zeeland website:
http://www.facade2017.nl/

Visitors and residents of Amsterdam are once again welcome to visit ARTZUID, this time for it’s 5th edition. Presented as a 5km art route you are guided past 60 monumental art works from Dutch and International abstract artists. The outdoor exhibition is being brought to you by Rudi Fuchs, art historian and former director of the Stedelijk Museum Amsterdam.

With a duration of 4 months and free entry, visitors can also partake in one of the daily guided tours or guest lectures in the surrounding hotels and museums.

For more information and locations please visit the ARTZUID website.

The 22nd of April 2017 will see the opening of Poly Pluto Pluri at Galería OMR, the first solo exhibition of Atelier Van Lieshout in Mexico.

Roughly translated as ´more more more´, Poly Pluto Pluri presents a selection of the work of Atelier Van Lieshout, offering an overview of artist Joep van Lieshout´s practice from the early 1990’s until the present day. Fuelled by Van Lieshout´s fascination with ´man and machine´, Poly Pluto Pluri charts the development of new technologies congruent to the advancement of humanity, with all of its successes and more notably, its failures.

We’re happy to announce that the artwork Pulse has been slected for the manifestation Licht 2017 in Graz, Austria. The work will be on display on the Kapistran-Pieller-Platz, opposite to the Kunsthaus Graz, from the 21st of April until the 4th of June.

Pulse is an interactive installation which aims to engage the inhabitants of Graz and to be at the heart of the community, expressing the pulse, the life of the city. The artwork is as a beacon, sending out lightsignals. These lightsignals will ‘beat’ to the same ‘rhytym’ as the pulse of a human heart. Every time a child is born in the Graz – which is approximately 11 times a day – the pulse and the intensity of the light will become stronger.
With this artwork, Atelier Van Lieshout wants to create a poetic collective moment for the citizens of Graz. Every time Pulse’s light intensifies, the artwork will celebrate the beginning of a human life, a new member of the community added. The artwork will enhance the existing sense of community, both by creating a collective experience and by serving as a physical landmark.

For more information about the work and the manifestation Licht 2017, please check the website of the KIÖR – Kunst in Offentlichen Raum Steiermark

This show presents both impressions from and reactions to the architecture, the history, and the repurposing of the St Agnes church, which is currently in use as König Galerie’s main exhibition space – for an impression please check the gallery website

St. Agnes is a prime example of Brutalist architecture. More than style or fashion, Brutalism was a mentality and even a philosophy that inspired the simplicity, physical and ethical gravity, and economy that the church building embodies. It is with these same reductive ideas that the artworks presented in the show were born. Brutalism’s efficiency is reflected, for instance, in the artworks from Atelier Van Lieshout’s Slave City series, which extends these principles to a societal perspective. Added to this are recent works from the series Cryptofuturism, in which Atelier Van Lieshout researches the origin of matter, material and form.

The exhibition opens on Friday 20 January and runs until 12 February, at König Galerie, Alexandrinenstrasse 118 – 121, Berlin, Germany.

From the 2nd of December, the foyer of the Gemeentemuseum Den Haag features the new artwork Henry, de Statistocraat by Atelier Van Lieshout. The eight-metre-high sculpture is designed to serve as a visitor information desk and is a humorous nod to the ‘rivalry’ between H.P. Berlage, architect of the Gemeentemuseum, and his Belgian contemporary and confrere Henry Van de Velde.

The commission was prompted by the Gemeentemuseum’s desire for a visitor information desk worthy of a great public art gallery. It had to be different from the usual nondescript counters found in railway stations, airports, municipal offices, cinemas and shops. Museum director Benno Tempel: “In many museums, the entrance hall is essentially no different from the equivalent in any railway station or airport. That’s why we’ve brought in the enfant terrible of the Dutch art world to design something completely out of the ordinary. The result is a distinctive information desk that will leave visitors in no possible doubt that this is a space for the arts.”

Van Lieshout’s creation, Henry, the Statistocrat, makes playful reference to the work of Belgian artist, designer and architect Henry van de Velde – a founder of art nouveau, trailblazer for the later Bauhaus, and famous in the Netherlands primarily as the architect of the Kröller-Müller Museum.
In terms of artistic ideas, Berlage and Van de Velde had much in common: both sought to eliminate the distinction between art and design and to approach architecture as a Gesamtkunstwerk. At the same time, they were rivals who competed for major contracts – especially for museum buildings. Berlage also produced a design for the Kröller-Müller Museum (which was rejected), and with Henry, the Statistocrat Van de Velde has now placed his stamp on the Gemeentemuseum.

Der Hausfreund is your most ambiguous friend. Like the postman, he comes around all too often, especially when you yourself are not around. A friend of different faces and functions – just like the multifaceted artworks of Dutch sculptor Joep van Lieshout. The eponymous exhibition at Galerie Krinzinger shows a selection of his recent artworks, which ask questions about destruction and renewal, coincidence and concept, minimalism and functionality.

‘The Good, the Bad and the Ugly’, Ruhrtriennale 2016, Bochum (DE)
Exhibition
“Can we still separate man and machine?”
At the 2016 edition of the Ruhrtriennale, Atelier Van Lieshout will be presenting the installation The Good, the Bad and the Ugly. The installation at Bochums’ Jahrhunderthalle will include last years’ public favorites like Domestikator and the Refektorium, in addition to a selection of new and site specific works focussing on the theme “Man and Machine”.
12 August – 24 September 2016

As part of the Jheronimusch Bosch 500 manifestation, Atelier Van Lieshout will present the Gesamtkunstwerk SlaveCity (2005 – 2009), as well as recent works, as part of a large solo exhibition at Museum De Pont in Tilburg.

Parallel with the Biennale di Venezia, Zuecca Project Space will be showcasing a selection of architectural models from SlaveCity
www.zueccaprojectspace.com

A survey of artists’ site-specific projects on the water, including Atelier Van Lieshouts Women on Waves container.

Atelier Van Lieshout, in collaboration with the Nationalgalerie, will be showing this public artwork on the Museuminsel for the next two years.

‘The Good, the Bad and the Ugly’, Ruhrtriennale, Bochum (DE)

‘The Good, the Bad and the Ugly’, Ruhrtriennale, Bochum (DE)
Exhibition

The exhibition offers a contemporary outlook on creation in the broadest sense of the term. It also plays freely with the idea of a domestic installation that has more to do with the apartment of an amateur than the white cube that is the gallery.

From Thursday the 5th until Sunday the 8th of February, our workshop and exhibition space will be open to the public, daily between 1 pm and 9 pm
On display for the first time in the Netherlands will be the Blast Furnace, a more than 11 metre high steel installation that pays homage to our industrial past yet at the same time offers us a glimpse of production methods of the future.
Additionally, the AVL team will be casting, melting and forging in the smoldering ovens and rudimental machinery from the Happy Industry installation. Both the Blast Furnace and Happy Industry will be installed especially for Art Rotterdam.

Location: Keileweg 18, Rotterdam, the Netherlands
Entrance: free
How to reach us: Atelier Van Lieshout/AVL-Mundo is an official stop on the Art Rotterdam shuttle bus service
www.artrotterdam.com
This event is part of the Art Rotterdam Week.